25 things to know before you come to Morocco

Morocco is just 8 miles away from Europe but it feels like thousands. It’s a completely different culture to Europe – that’s why I came here – and It took me a while to get used to.

Here are 25 things that might be useful to know before coming to Morocco – there are probably loads more so please feel free to add to this in the comments below. 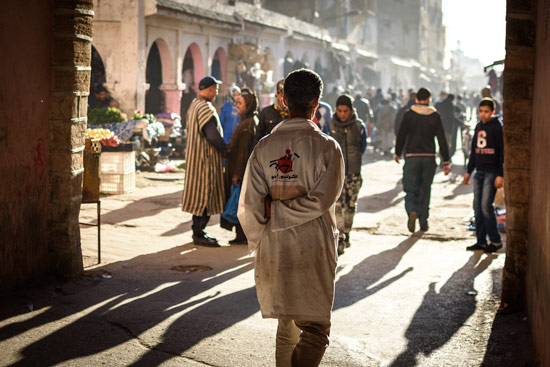 1.People are not keen on cameras

I got shouted and scowled at several times for taking photos. Women especially don’t like being in pictures and they might throw stones – or bits of pastry – at you. It’s fair enough isn’t it. Cameras are a bit annoying, but I really like taking photographs.

2.locals will invite you to eat and drink tea all the time

I’d go to buy a loaf of bread and end up sitting in the back of the shop sharing a tagine and drinking tea with a Moroccan family. If you refuse their offer of dinner or tea they will insist you come because ‘tea takes just 5 minutes’.

3.Eat with your hands

Food is often eaten with hands from communal tagine. You use the bread to break and scoop up the food. Before eating, everyone washes their hands in a basin that’s passed around.

4.The roads are pretty good but roadworks can be dangerous!

Many of the roads are better than some countries in Europe. But some of the roadworks can be dangerous – just a few brightly coloured cones would help.

5.Police are alright but they want to make money

The police are friendly enough but it’s pretty clear to me that they are on a money mission. I got fined twice: 35 for sleeping in my van and 30 euro for not wearing a seatbelt. And then another truck flies past with locals riding in the back alongside cows, goats and bits of scrap metal. If you don’t have money you can probably get away with it on the spot.

6.People look out for each other

I think that the sense of community is the strongest out of any country I’ve been to. If someone sees something wrong or someone needs some help they will step in.

I mean really helpful! After a while you may start to feel like there is a fine line between helpful and annoying. But the thing is, most people genuinely want to help you, especially as a traveller. Not in Marrakech though, all they want is your money.

If the whole of morocco was like Marrakech I wouldn’t have stayed here for 3 months. In marrakech, it’s all about making money out of you as a tourist. It can put you in a sort of closed off state where you reject everyones help and conversation because you know what’s coming next – money.

9.Everyone knows someone who has what you need

If you need to get something fixed or something made there’s always a guy who is no more than a few minutes away. Moroccans are good at fixing stuff and if they cant fix it they’ll remake it.

10.People will cycle with no lights in the dark

There are not many street lights. You have to be careful when drivng at night. Always drive a good distance from the curb because locals on bikes and mopeds can be really difficult to see, only appearing at last minute. I saw a few people get knocked off their bikes – Moroccan men who just get straight back on like it happens every day.

11.You get offered hash and opium all of the time

I mean ALL the time. Hash is big business here. It’s all grown in the Rif Mountains. It’s where the word reefer comes from.

12.People rarely take no for an answer

If someone is trying to sell you something you can’t expect them to leave after saying no. They will follow you in the street (mainly in big cities like Fez and Marrakech) until you tell them to leave you. You have to tell them to go away, they will not leave you if you just say ‘no’, even if you say it 20 times.

It’s normal to just join people. In England it’s weird to join a group round a fire or talk to strangers and invite them to tea and music. Not in Morocco. I like this.

14.You might get hassled if you are a woman traveller

It’s not unsafe but it probably is annoying. Women, please feel free to share advice and experience in the comments below.

15.In tourist areas everything leads to shop

I went to Ait Benhaddou. Scarfs, jewlery, rugs and hassle. There are times when It just takes too much energy.

16.Moroccans speak a lot of languages

The main two languages are Arabic and Berber but French is their unofficial first language. Many Moroccans will also speak English, Italian and Spanish.

17.Rubbish is a problem

Plastic is a big problem and they don’t have any proper recycling. Most of the rubbish is burnt or just left. I noticed many locals will just drop litter where ever they stand which I don’t really get.

18.Men will walk down the street holding hands

19.Being gay is a criminal offence

You may have a hard time if you openly show affection in public. Can you hold hands though? I don’t know.

Moroccans like to take it easy and they never rush. Time and schedules are not followed exactly

21.The price is always open to discussion

It’s in their culture to negotiate the price of things and it can go on for a long time! see post: 12 things I learnt shopping in the souks of Morocco

It’s about 0.78 euros (about 65p) for a litre of diesel. It gets a bit cheaper as you go further south down to the western sahara.

23.Locals want to swap things all the time

They mainly want electronics, clothes and bikes. Everywhere I went locals would come to the van asking for any of these things to swap.

It’s normal for locals to hitch lifts up the road or to the next village. Pick them up, you may even get invited back to their home for tea or lunch.

25.But some hitchhikers are just trying to sell you something

I picked up a guy who had broken down by the side of the road. We ended up at his shop.

Have you been to Morocco? feel free to add to this in the comments below or just share your experience, stories and tips

Also see: 12 things I learnt shopping the Souks of Morocco