The theatre of Epidaurus (Greece) is one of the best preserved ancient theatres, dating back to 4th century B.C, and is world famous for its exceptional acoustics. I had to go and get the mic to do a recording (video below)…

There’s loads of interesting stuff round this area of ancient Epidaurus, but I’ll just show you the coolest bit: the acoustics of the theatre.

How does it work?

The theatre, due to its shape, is an amplifier. The interesting thing is that it only amplifies certain frequencies which happen to be just the right ones – it’s not really known if this was intentional.

It’s the steps – they form an efficient acoustic filter which minimises background noise and amplifies the actors and musicians. 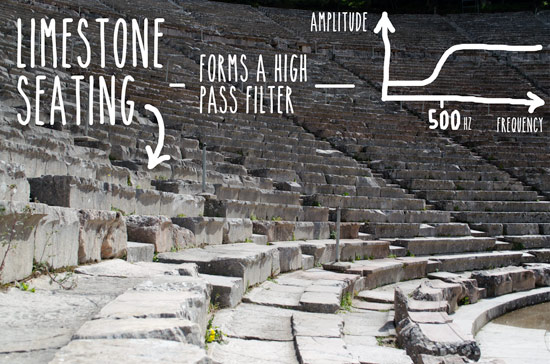 All sound below the frequency about 500Hz (like the unwanted sound of the audience and the wind) get absorbed whilst frequencies above this cutoff value (like an actors voice) get reflected and amplified through the theatre. This does cut out some of the lower end of an actors voice but works because of the ‘virtual pitch’ phenomenon where the brain fills in the missing frequencies.

Did the Greeks know this?

I reckon watching a performance here would be really good. The location is also pretty amazing – right on the side of a mountain, surrounded by trees