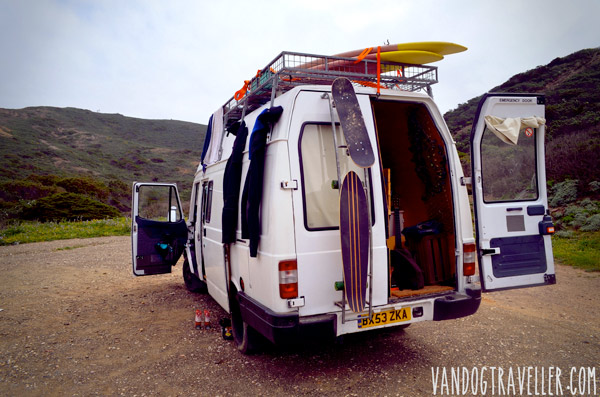 We carried on to Portugal via a few nights in Cadiz and Seville. I’ve only ever heard good things about Portugal; friendly people, good parties and big waves.

We stayed around the south coast for a few nights (some great spots for vans) before dropping Erica (Ross’ gf) off at Faro airport for her flight back to England. The plan was to go to Sagres and maybe do some surfing. I’d recently read that the biggest wave ever surfed in the world (80ft) was on this west coast of Portugal. I don’t think I’ve ever seen proper waves, let alone surf one. I can’t even surf anyway.

Just as Erica got out the van with her bag, a guy wondered over to the van with a big smile and backpack. He asked if we’re going to Sagres. He got in, made himself comfortable and shared his big bar of Milka like he’d been doing this for years.

We got closer to the coast and I started to realise that most of the people are heading here for the waves with all the nicely painted surf busses coming in and out the nearby Lidl. Ben (the hitchhiker) knew exactly which beach to go to (to Villa Do Bispo then follow sign to beach -coordinates: N37 06.533 W8 56.149).

We stopped by surf shop in the village and rented some boards and wetsuits. The carpark for the beach had been transformed into a playground/campsite for surfers; tents, beer, BBQs and skateboards.

Ben showed us the basics; catching a wave and getting up on the board. It was a lot more difficult when in the water – those waves are fast!

After surfing we sat on our boards to watch the sunset then went back to the van for a fire and food. The thought of rushing along a big wave replayed in my mind all night. 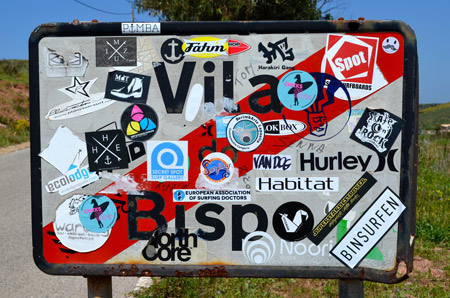 It’s strange how some things work out. We wanted to do some surfing but that’s all we knew. We didn’t have a clue about where to go, what boards to get, whether we should get lessons. We were lucky that we met Ben, the hitchhiking surfer. The crazy thing is, he approached us and he only saw us because we couldn’t find a parking space. We had to pull in at the ‘quick drop off’ place in the airport – right where he was standing. It’s difficult not to think that this is some kind of magic…