We were driving in the van (family in the back) to the Atlas Mountains of Morocco – see this post. The temperature gauge hit 3/4 and there was a loss of power. I pulled over and there was a lot of coolant missing.

In this post I’ll go through what happened and how I got it fixed. This is my second breakdown on the road – see the first on here. I probably wouldn’t say this was a proper breakdown, just a little problem, although it could have been a lot worse if I carried on driving. 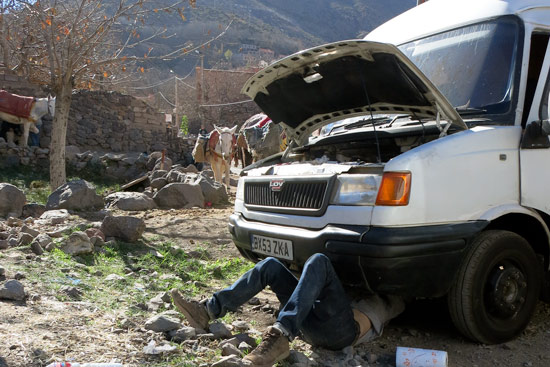 There’s a leak in the coolant system

I topped up the coolant reservoir with the engine running. There were bubbles consistently surfacing inside the reservoir tank. Air is getting into the coolant circuit so there must be a leak somewhere – possibly on the vacuum side of the water pump?

I inspected around engine bay for dripping coolant and found a damaged rubber hose in the radiator circuit. I am so glad that was just an external leak and not some head gasket problem. There has always been a slow leak but It was never enough to be able to find it, but this must be it and it’s obviously got much worse.

Reoccurring lesson: if there is a problem with your engine, it will get worse.

Cause of the leak

A hose was rubbing against the edge of some metal and it’s worn right through.

Another lesson: regularly inspect all hoses and wire looms for contact on abrasive surfaces 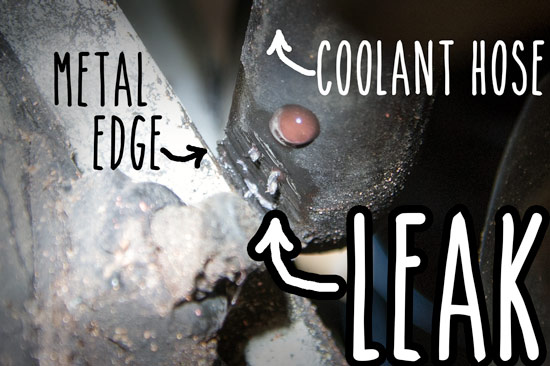 I was relieved that it was this simple, but it could have turned into a much bigger problem if I kept on driving.

I did a temporary repair, using a square of sticky-backed bitumen, to get me to the nearest village. The water just about held in long enough. 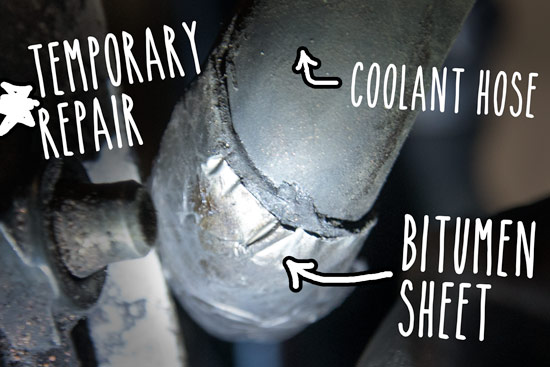 Get to the nearest village

My plan was to buy a bit of rubber hose from the village, cut it to length and fit it with jubilee clips, replacing the damaged one.

A guy walking past (as soon as I stopped in the village) worked out the situation instantly and told me his friend, ‘the best mechanic in the village’, was just round the corner. So I followed him as he guided me through the narrow back streets.

Note: in Morocco, everyone knows the best person at [insert whatever here] in the village

I only wanted to buy a bit of hose but they spoke no English and I spoke no Arabic. Within minutes there were 3 people (plus audience) under and over the van and before I knew it they’d removed a whole T–piece of the hose assembly. So I guess they’re doing it then. I joined the audience. 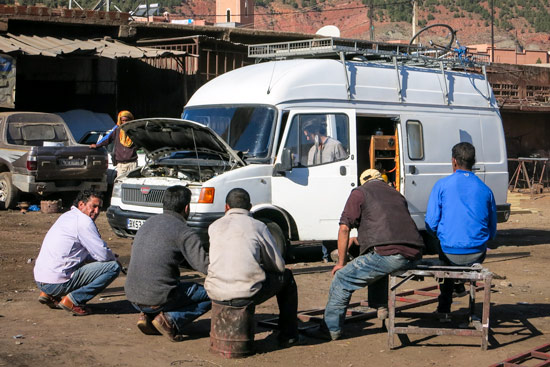 The guy emptied a big bag of hoses onto the floor

I was amazed that the guy he found a piece of hose that was not only the correct diameter but also bent in the exact same places and angles as the old hose. He didn’t seem amazed though. 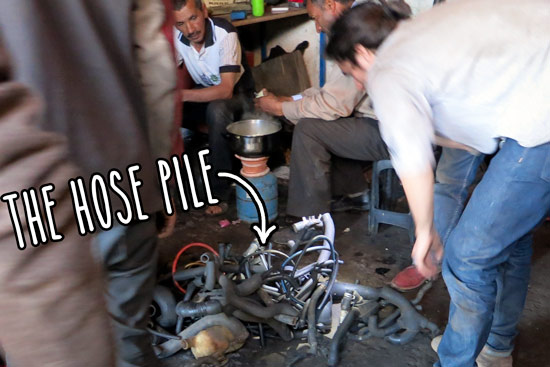 The van was fixed

He made sure the hose was put back in a different position so the same thing didn’t happen again. He also revved the engine seriously hard to test for leaks. No bubbles in the coolant reservoir tank and no loss of coolant. So it all looks good.

Another lesson: Agree on a price before any work takes place.

I was just happy that the van was all good and that it didn’t end up causing a big overheating problem. They did a good job and I was happy that it wasn’t anything worse like a failing head gasket or internal leaking within the engine block.

Back on the road

This was a happy breakdown and I was lucky to have the guy escort me to his friend 1 minute round the corner, and to have it all fixed in an hour.

So we got to the mountains with full LDV power (see Exploring The High Atlas Mountains of Morocco). Everything good 🙂