There are about 5000 brown bears living in the Carpathian Mountains of Romania.

After seeing a bear cross the road the other night during a night-time drive down a mountain (see transfagasan pass post), I wanted to see more. I spent the next 3 days touring the Piatra Craiului Mountains and the Parcul Natural Bucegi trying to look for more bears.

I didn’t see any. This post has 1 bad picture of a bear (2 if you count the picture of the bear sign). Still, I thought I’d share my 3 day mountain detour with you anyway… 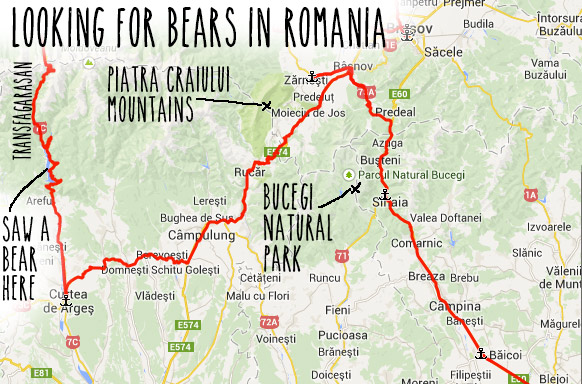 A story I heard: I heard some story of a drunk student who started a fight with a bear in a neighbourhood street of Brasov. He didn’t win. ­­

A 3 day tour of the Southern Carpathians – I want to see a bear!

I didn’t see any more bears but I had a great time exploring these mountains. If you like wildlife, camping, hiking, climbing then you have to go to Romania. I’d love to come back in the summer for a few days/weeks of camping and exploring. This is free-camping country!