The best road in the world? – driving the Transfagarasan mountain pass 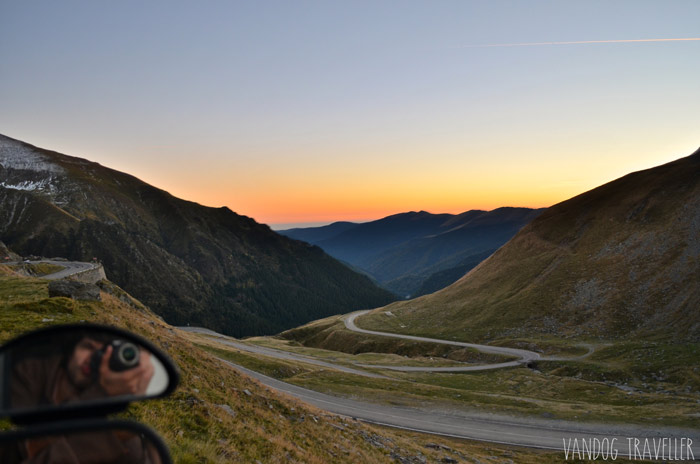 I’m not really into roads and cars. And I don’t really listen to what that Jeremy Clarkson has to say. But driving this road through these Mountains is pretty exhilarating – even in a van.

This is the Transfagersan mountain pass in Romaina

The road closes for the winter on the 1st of October and reopens mid summer. I wasn’t sure about doing this road at first – an old, overloaded van with steering wheel on the other side plus I didn’t know if there would be much snow at the top.

BBC: one of the 7 riskiest roads in the world

Large sections of this road have sheer drops of up to 1000ft – with no barriers. If the brakes fail on this road then that’s it! Brakes only fail in films though so it’s cool. Today is the 30th of September – I have 24 hours before this road closes…

Then it got dark

I had to drive the last 40 miles of the decent in the dark. I was the only one on the road. It was great, if a little surreal – the moon coming in and out of view, the trees moving past the huge rock faces in the background, the crystal clear stars in the sky… and the Ravi Shankar music I was playing in the van.

I missed a few things (dam, the lake, the castle) because it was dark but I reckon it was worth it to see sunset at the top when no one else was there.

And then I saw a bear!

A bear crossed the road and then stopped behind some bushes by the roadside and watched as I slowly passed. I stopped just a bit after the bear. We stared at each other for about 20 seconds. My photograph attempt was pretty much a failure though. I’m sorry

I spent the next 3 days back in the mountains looking for more bears (see post about looking for bears). It looks like that picture is the best I’ll get.

What do you reckon… the best road in the world? would you drive it?

From Van to Home – Your Ultimate Van Conversion Guide

Popular | By Country | All Vanlife