20 essential tips if you want to see the Aurora Borealis – the Northern Lights!

It had been 7 days since we drove past the sign that said ‘The Arctic Circle’ but we still hadn’t seen any sign of the Aurora Borealis.

No one wants to leave Norway until they’ve seen the Northern Lights.

Also see this post (with more Aurora photos): Lofoten by Campervan: Watching the Northern Lights on Haukland Beach and 16 tips for Photographing the Aurora

So I did some research and learnt that the Aurora probably won’t just appear in front of your face. You have get a few things right and put a bit of effort in – and have a little (or a lot) of patience.

Once I knew what I was doing, we saw the Aurora nearly every night for a whole week, chasing it around the Lofoten Islands (Norway) in the van.

So in this post I’ll share with you the 19 things I learnt that will give the best chances of seeing the Aurora Borealis when you visit the Arctic Circle – whether you’re in Norway or Alaska it doesn’t really matter.

1. Be in the right part of the world

You need to be near the ‘Aurora Zone’. That’s somewhere between 66° and 69° latitude, just above the Arctic Circle. The typical countries are Norway, Sweden, Finland, Iceland, Greenland and Canada. In this post I’m in the Lofoten Islands (Norway) at around 67.5° latitude.

2. September to March is Aurora season

From September the skies get darker and the Aurora starts to become visible. Up to December it’s not too cold outside (compared to mid winter) and the roads are still fairly safe to drive on – in Norway at least.

I have no experience of the Aurora in the other months but if you want snow covered landscapes and/or frozen lakes in your photographs, you’ll probably want to come later on in the winter – like January to March.

I think it’s best to start off by finding some of the known local Aurora watching spots. You can of course scout out your own places, and if you’re anything like me you’ll end up naturally finding your own places later on.

You can Google phrases like, [place you’re visiting] + ‘northern lights/aurora’.

Image searches work well for this – google, Instagram, Flikr etc. For example I searched for ‘Northern Lights Aurora Lofoten Islands’. I made a list of several different spots around the Lofoten Islands – some with views over mountains and some with views out to sea – and marked them on a map. I will share these places with you in another blog post.

4. Explore in daylight – especially if you want to get photographs

This isn’t hugely essential but it does help to be at least a little bit familiar with the place in daylight so you can get some ideas for shots. And there’s more chance you’ll discover new places when you can actually see where you’re going.

5. Use an app to check geomagnetic activity

It’s geomagnetic storms that cause the Northern Lights to occur. The strength of these storms are measured on a scale of 0 to 9, called the Kp Index. The bigger the storm, the higher the Kp value and the further down in latitude the lights will be visible. For example, with a Kp value of 9 (a severe geomagnetic storm) it’s possible you’ll see the Aurora all the way down in France, maybe Spain.

But if you’re already in the Aurora Zone then you don’t need to pay as much attention to the Kp Index since anything over Kp1 can give you a good display.

It’s easy to say the higher the Kp the better, but it doesn’t necessarily mean a better or stronger Aurora display. The strongest and most amazing Aurora I saw was when there was a KP value of 1.5. Still, it can be a useful bit of information to take in to account, along with the local weather.

I used an app called ‘My Aurora Forecast’ to check the KP index.

6. Use a real-time weather app

Ideally you want the app to be as real-time as possible, using live satellite and meteorological data. Use this information to help you decide where to go, or which one of your chosen spots you’ll visit that evening. You need to aim for the clearest skies possible.

I used the Yr weather map (https://www.yr.no) to help find a clear bit of sky. It’s really useful to see where the clouds are moving, and it will predict where they’ll be +90 minutes from now. I found it to be very accurate.

This is what it looks like when the clouds break

7. Position yourself with clear view north

The Aurora often stretches from north west to east, so a viewing position with a clear panoramic view north is ideal.

The more you are outside the more chance you’ll have of seeing the Aurora. But also, assuming you are a tourist and you don’t know the local climate very well, it will help you get a good feel of the area and how the weather behaves.

9. Get your night time eyes

Spend as little time as possible looking at your phone screen, or any screen. Remember to use night mode if you are using your phone, as well as turning the brightness right down to minimum.

10. Look for a faint misty green glow in the sky

A light show may start off as a very weak hardly visible green glow. It may start very early on in the night, as soon as the sun sets, or it may only appear much later into the night.

11. Is that the Aurora? use your camera to check

Quite often there is Aurora activity happening that you cannot see with your eyes, but your camera can. Try taking a photo with a high ISO value and long shutter speed – anything more than a second. I’ll be doing a separate post on how to photograph the Aurora.

12. Be ready to move to a different location

On the Lofoten Islands clouds can come over and cover the sky in a matter of minutes. But just a few miles down the road the sky could be completely clear with an amazing Aurora show.

Some people prefer to stick to one spot and others will move around as the Aurora changes position in the sky, or as the weather changes.

If you don’t see the Aurora by about 12:30am it’s probably not going to happen. I found this to be true most of the time. I also noticed that when the Aurora came on early in the evening it could be a sign of a strong display later on, as it gets even darker.

I wasn’t very well prepared for Norway (the cold) and I quickly realised having warm enough clothes makes a huge difference to your patience when you’re stood outside all night with a camera.

A decent hat, scarf and insulated jacket makes a big difference. Without that down jacket there’s no way I would have been able to stand outside for that long trying to get photos of the Aurora. That was just about enough for me during November in the Lofoten Islands.

This is a good way of staying warm outside for long periods. And fires are just nice. It makes everything feel a little more wild and primal. Although it’s not always convenient.

16. Don’t worry too much about the moon

I read some advice saying the Aurora is best experienced on a new moon, when it’s at its smallest. Maybe, I don’t know. But I found that if the Aurora is on then you’ll see it, moon or no moon.

The moon helps you see where you’re going. And it makes nice reflections on water. And it illuminates the snow tipped mountains for nice photos. I like the moon.

Even if you think you’ve seen it, keep going outside, keep looking for it for the remaining time of your visit. The displays can be very different from night to night. It’s a little addictive.

18. Having a campervan really helps

If it wasn’t for having a van I’m sure we would have missed a lot of Aurora displays. You’re basically already outside and so you’re a lot more tuned in to the weather. Having full mobility will let you find a clear bit of sky rather than waiting for the clouds to clear, which may never happen. And when the show is over you can make a cup of tea and go to bed.

There’s always the possibility of having to go home without seeing the Aurora. But based on the few weeks I spent up in the Arctic Circle I’d say that if you spend about 10 days in the Lofoten Islands and you don’t see the Aurora after following the tips in this blog post, you’d be quite unlucky.

So give yourself at least 10 days and make the effort every night.

If you’re patient and stubborn, you’ll be fine.

If you have very limited time on your visit it might be worth getting a guide. A good guide will know the very best locations and also will be able to read the skies and weather way better than you. They’ll know all the local roads and will drive you to multiple locations, where the sky is clear.

If anyone knows a good guide, feel free to recommend them in the comments.

Some of my favourite and most memorable moments are when I’ve been completely in the wilderness, outside under a dark sky, surrounded by mountains, thinking thoughts like ‘what even is this thing we’re living on?’. Add the Aurora on top of this and I’d say it’s the coolest natural phenomenon I’ve ever experienced.

I recommend it. Go and do it! and let me know how it goes

Lofoten by Campervan: Watching the Northern Lights on Haukland Beach

16 tips for Photographing the Aurora

Have you see the Aurora? Any more tips or recommendations to add to this? Please comment below 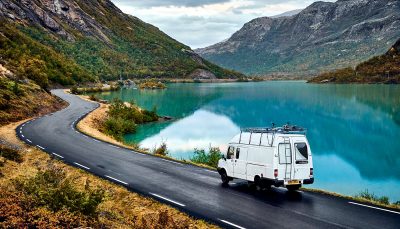 Norway by Campervan – the best bits 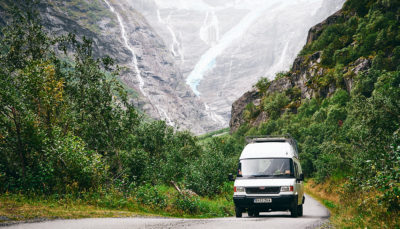 Camping next to a glacier in Norway’s Jostedalsbreen National Park 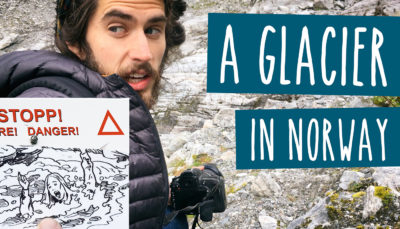 From Van to Home – Your Ultimate Van Conversion Guide

Popular | By Country | All Vanlife