The van has been in the garage for nearly 2 weeks now so I thought I’d do a list of all work done. It went in to get the steering box fitted/setup and to get a new full MOT on the 13th of Feb. Yeah I’ve been bored and frustrated. 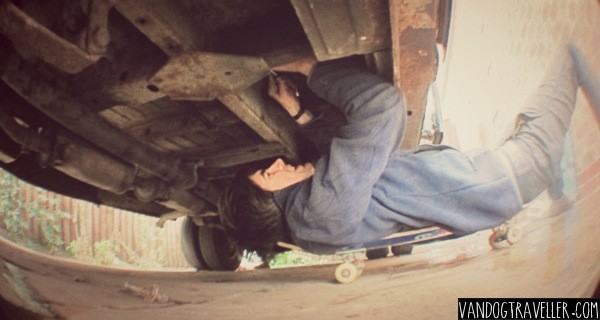 The list of work done below has just been to get it running reliably how it should, not to upgrade or intentionally modify. If you’re thinking of buying an +10 year old van then either think again or expect some problems… I guess.

One thing after another

Part of the reason I bought this van is that the previous owner had sorted out many of the common problems. Little did I know, there was a lot more to come.

The starter motors tend to fail on these because they get jammed and clogged up with bits from the deteriorating dual mass flywheel (which is another problem). The starter motor will keep failing until the DMF is sorted or replaced with a fixed type.

Known problem with this Ford gearbox. It seems to be at round 70k miles, the DMF begins to fail. Rather than putting a new one in, it was replaced with an older type (normal) fixed flywheel. The only disadvantage is that the gear changes are little more jerky – especially low gears.

The old ones rotted. Replaced with copper

Apparently these wear out rather fast if not well maintained and frequently greased. A fellow Convoy owner recommended that they be greased once a month!

Another (simple) common problem but if left unfixed will lead to much bigger problems; water getting onto the ECU box directly under the windscreen, passenger footwell.

monitors the rotation of the crank shaft. Symptoms of a fault can be intermittent starting or engine cutting out. This component gets hot and dirty quickly so can be prone to failure.

Work done since I’ve owned it

When I got the van it took about 7 seconds (sometimes more) of cranking until it fired up and also leaked a fair bit of oil. This was the first of many frustrating problems and sourcing of obsolete parts.

This was source of the oil leak. Replaced with a new one.

These have a tendency to corrode, snap or completely seize up. Mine was seized on one side. The handbrake hardly worked.

The old one had been crushed for whatever reason – driving over boulders?

The mount that the center bearing sits on had been bent upwards and also twisted. I sourced a new one from the transit centre in Doncaster.

This was badly worn resulting in speed wobbles and pretty sloppy steering.

This was a big job but hopefully worth it. See the post on undersealing and rustproofing

The steering box was too warn to be tightened up. There was excessive play which made dodging cars and high wind difficult.

A perished fuel line from the fuel tank was the culprit for the bad starting. The fuel would drop back down the line one the engine was turned off due to air getting into the pipe. This meant that the fuel pump would have to pump the fuel all the way through the whole fuel line (from tank at back of van) when starting and hence took about 7 seconds until it fired up.

The wrong fuel filter was fitted from previous owner

The old radiator was cracked and I made it worse when I removed it for rust proofing. Got an old one from a used parts dealer.

The rear brakes were not coming on evenly. Found out the cylinders were different on each side! This was an MOT failure

The ends were not terminated properly – Someone did a bad job of replacing the brake lines.

The old belt was slipping and squeaking – probably ready to snap. I’d rather change this now rather than at the side of the road. All good

I just hope this list does not get much bigger!