Many older vehicles (especially vans) don’t have much protection against rust on the under side where it’s exposed to the elements and harsh conditions. I used the Hammerite underbody seal (this one) on all of the underside floor panels of my van, including the wheel arches. The example below just shows the wheel arch. 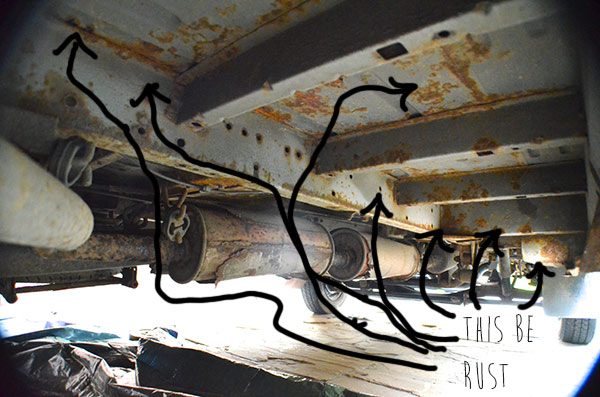 The picture probably looks worse than it actually is (although I have to think that). Most of the bad rust is on the panels–the chassis looks in great nick with only a few patches of surface rust. I highlighted the worst of it in this post fixing the floor rust on my LDV

This is a very time consuming job but it’s worth spending time to do it properly. It’s probably best to divide the area up and work on one section at a time.

I used 2 coats of metal paint. Again, this is just the same as the previous section on treating surface rust.

I applied two fairly thick coats of the Hammerite underbody seal with a brush, leaving it for one day before applying the second coat. This stuff takes a few weeks to fully set, leaving a tough flexible layer

5. Repeat over whole underneath area

Feel free to add any comments or suggestions 🙂